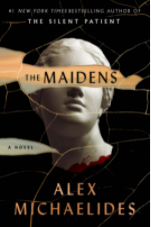 The Maidens  by Alex Michaeldies, is released on the 15th June, and has already garnered high praise from book bloggers. Set in Cambridge, psychotherapist Mariana visits to support her niece through the brutal death of a friend at university, and finds herself in a mirror labyrinth of mystery and myth. So far, so The Secret History.

Michaeldies manages to weave a complex and well layered world, full of memorable characters who while they would be jarring in a more every day setting, settle nicely into the rarefied atmosphere of academia. It is a mistake to think that world building is only important in fantasy and sci-fi, because each contemporary novel holds a world of it’s own, and while it is based far more on reality, writer cannot rely on all readers to have experienced each reality ourselves and understand it’s subtleties and shorthand’s. Therefore even in a contemporary setting a world that is detailed, coherent and believable, can be as important as it is for writing which relies less on shared experience.

This is a work that undermines the notion of the contemporary realism as it is set half in reality, half in myth, half in the physical world, half in the mind. Being partly made of myth and mind, the reality The Maidens presents us with beyond physical buildings, and bodies is slippery, subjective and hard to pin down. Indeed the real, yet still alien to many, setting of Cambridge, a city that has it’s own fairytaleish vibe means that Michaeldies is fully able to leverage the central myth in this narrative

The central myth is that of Demeter and Persephone. For those who don’t know, Persephone is kidnapped and trapped by over-zealous suitor turned husband Hades in the underworld for six months every year – which is possibly the first recording in literature of rape and domestic violence. The abduction of Persephone, and Zeus’s poor compromise between husband Hades, and mother Demeter, results in Demeter a nature goddess, being almightily pissed off and grieving heavily, hence we have winter ever time Persephone is forced to go back and live with her domineering and controlling husband – quite literally in hell.

The themes in this myth, control, selfish powerful men bent on their own gratification, icy grief which freezes people in place, sacrifice, death and rebirth, are all echoed in the complex relationships and characters within The Maidens. Indeed, much like Persephone, the women who are killed are generally there to serve someone else’s purpose, weather that is a self appointed parent, or a killer, who in the act of taking life tries to make themselves equal to a god. It is good to remember that they also serve a purpose for the writer, and us as readers, without their deaths there would be no book, and perhaps therefore we are complicit in their sacrifice.

The Maidens is rich mainly because of the straddling between what is real, and what is experienced, and in a less deft hands it could have lead to dizzying lurches for the reader. However Michaeldies slips effortlessly between all the worlds, and counter worlds, like Persephone slipping between earth and hades. The only misstep in an otherwise highly readable book is a clunky exposition from Mariana at the beginning which could have been woven into the narrative more elegantly – but all in all I recommend The Maidens, as THE summer read for all you crime fiction fans out there.

If you haven’t read it already, and The Maidens sounds right up your street, I would also recommend Donna Tart’s The Secret History. Same vibes, but levelled up and set in America.