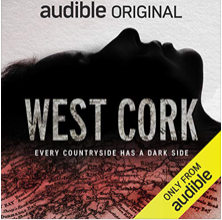 The podcast version of this review can be found here.

West Cork comes from the Audible Original stable, which of course, is owned by the behemoth which is Amazon. You can tell immediately the two journalists involved Sam Bunge and Jennifer Forde had a good budget to make this podcast. It shows everywhere from the layered and evocative soundscape, to the three years they spent investigating every nook, every canny of this complex and fascinating case.

West Cork centres on the murder of Sophie Toscan du Plantier. Intelligent, young, French, and married to a famous director this case was always going to get international attention. The journalist have a light touch on the podcast, they lay the facts out in the dispassionate way which has always been the sign of top notch journalism, but with enough information, colour and texture for listeners to feel fully immersed in the small villages and rural settings of West Cork, surprised to suddenly find itself in the glare of international news.

However it is not just Sophie who is at the centre, but Iain Bailey. A man who typifies promise gone to rot because of a simple lack of patience. He’s skimmed money from friends, he’s alienated people, he’s tried on a plethora of careers including poetry, he is a domestic abuser. His greatest talent, as is obvious when you listen interviews, is his ability in every situation to turn attention to himself with constant mythologizing about his own greatness, intelligence and knowledge. Iain is not someone who makes it easy to like him.

However Iain is not the only villain of the piece, the local Guarda also are shown to be inept and blinkered in turn. The narrative takes a weird turn when the informant the Garda pay to spy on Iain becomes a double agent spying back on them, and after that there is the trial for defamation, and the witness who makes and retracts statement in a truly confusing way. The story in less capable hands would have the distinct whiffs of an amateur dramatic societies staging of Waiting for Godot. Iain’s insistence on filling the room as much as he can also means that it sometimes becomes easy to forget that there was a living, once breathing woman at the centre.

As journalists capable of high calibre work like this though Bunge and Forde do not allow Iain to dominate and they bring the series back with interviews with Sophie’s son, who surprisingly still visits the cottage his mother had bought in West Cork. There have been more developments in the case in the last eighteen months, with France, tired of waiting for Irish justice stepping in. Like everything that involves Iain Bailey though it is slippery and divisive, something that is hard to hold on to, and filled with doubt, never once being able to settle firmly in itself.

The mind boggling complexity of this case means that this case is likely to be discussed, in the true crime, and crime fiction world for some time. Along with the excellent craftsmanship of the podcast West Cork is going to be an important part of the True Crime cannon and an example of excellence for many years to come.